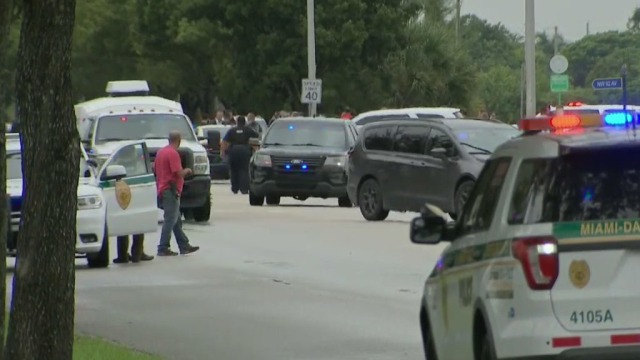 It happened in the area of NW 92nd Avenue and NW 24th Street.

“At approximately 11:10 a.m. there was an incident that occurred off-site. It resulted in some type of dispute. It resulted in one man chasing another man by vehicle. Our officers were alerted to the incident that had occurred and were in the area. They came upon a traffic accident where a vehicle had struck a tree and spun out of control. As our officers were observing this, the subject in that car jumped out of his car and opened fire. He struck the officer’s vehicle several times, The officer and other officers in the vicinity opened fire, they struck the subject. The subject has been pronounced dead,” said Doral police spokesman Ray Valdes.

Valdes said two officers were injured in the exchange of gunfire.

“One received a gunshot wound to the chest, the leg, and the arm. Fortunately, he was wearing a bulletproof vest. The bulletproof vest stopped the round. He was initially transported to Jackson West. The doctors there assessed his injuries and decided, as a precaution, to transfer him to Ryder Trauma. The second officer received graze to the left cheek, either from glass or shrapnel, he was fine. He was transported to Kendall Regional,” said Valdes.

Valdes said he did not know what led to the initial dispute. A source told CBS4 that it stemmed from a dispute at 10840 NW 22nd Street in Sweetwater. One person was chasing another who was trying to get to Miami-Dade police headquarters for safety. The person being chased is being treated as a witness and has been detained for questioning.

Valdes said that the officers had no choice but to fire on the suspect shooting at them.

“Undoubtedly. The officer, what he described on the radio, was a vehicle losing control and striking a tree. Before he can react, the gentleman that was in that vehicle jumped out of the car and opened fire on the officers,” he said.

Valdes said it was alarming to hear that another police officer had been shot. Hollywood police Officer Yandy Chirino was fatally shot Sunday night when he responded to a ‘suspicious person’ call on North Hills Drive.

“It’s alarming. Anytime that you hear that an officer has been shot you have that moment of trepidation until you get all the facts and figure out exactly what’s going on. So I will say it was touch and go for me personally in light of what happened earlier this week with another agency in South Florida. It’s just a stark reminder of the dangers our officers face every day,” he said.

“When you decide to shoot at someone who is entrusted and charged with the safety of the community, you must be a very sick and very desperate individual,” he added.

Valdes said a third person was shot. He said it was a man in a panel truck who was struck in the leg, his injuries are non-life-threatening.

“Out prayers go out to the families. We ask you all to keep them in your prayers,” said Doral Mayor J.C Bermudez.

Bermudez said it’s an unusual incident for his city.

“You know all of our cities are inter-related. We work together with not only the county but other agencies. The reality in South Florida is that we all work together, what can start in other cities can end here. This very well may have started somewhere else but it ended up in Doral,” he said.

“I’m pretty proud of our officers,” he added. “Anyone who has been on thoroughfare knows it is one of the busiest in South Florida. We are very lucky no other civilians suffered injuries.”

The shooting will be investigated by the Florida Department of Law Enforcement.